Nearly every time I drive to town, two horses stand in the pasture west of Wilmer’s house. A bay and a butterscotch dun. The last of his bunch.

Sometimes they’re close to the road, snoozing in perfect contentment under the summer sun, at others they are down in the dike a quarter of a mile away, drifting a hundred yards or more apart while grazing the sweet new grass, but still always together. 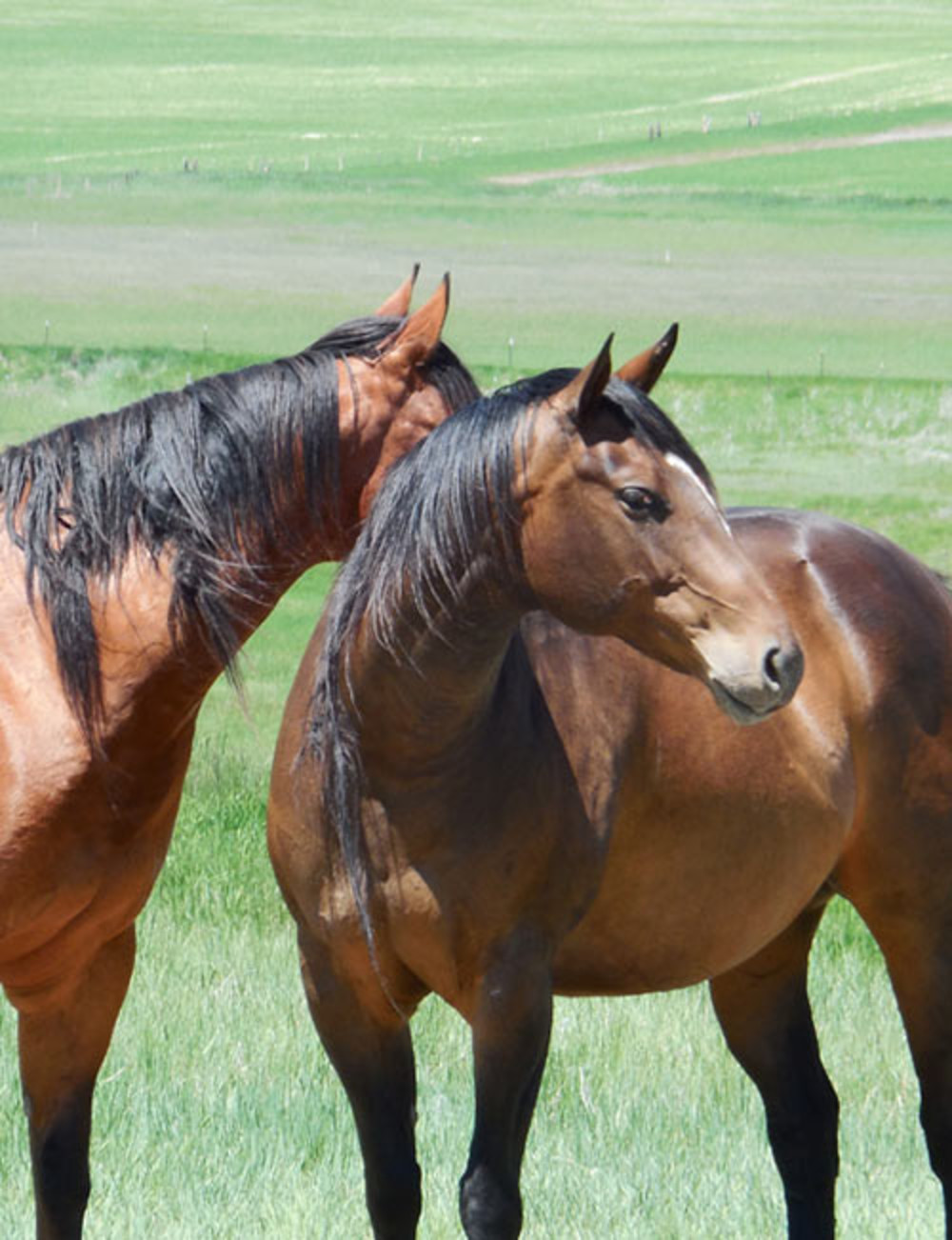 Quality shows in their every line. Like Thoroughbreds who are bred for racing, these horses were made for cows. The strong canon bones, the short straight back, the muscled hind quarters designed for quick turns, fast stops, and strength while holding a rope with a cow on the end. From the first dappled gray mare, Wilmer picked the best. Registered stock only.

I’ve watched these two now while his health has slowly eroded, taking him away from halter breaking the colts, currying the yearlings and teaching them to pick up their feet, sending the two year olds out to saddle, selling good prospects to riders who still drag calves to the fire. Now he is confined to the nursing home, where he no longer knows or sees his beautiful horses, where no one can even tell him about them, for he cannot understand. It is a sorrow to us all.

I braked to a stop yesterday on the way home from the field, a glorious day in June, seeing them standing right by the fence, tossing their heads up and down as they tried to dislodge the first early flies, stamping occasionally to knock one off of their belly. The slick black hair of their manes hung tangled and long, matted ropes looking like those of the wild horses left to run free in the Pryor’s, while their tails, unpulled, unthinned, swept close to the ground.

I doubted they would see a brush again.

A round patch of dirt under their feet puffed up little poofs of dust as they moved, an oblong circle showing they’d found the highest point in the pasture and used it to catch the summer breeze.

As they swung around, the clear white lines of Wilmer and Nora’s brand shone bright on the dun’s right hip. W Bar N. The universal mark of ownership, used on every head of livestock on their ranch. The sheep. The cattle. The horses. Preventing loss from stealing, and identification if an animal strayed onto other range.

I glanced back to see the dun lift his head and lay his chin across the back of the bay. For long minutes they stood there, relaxed and unmoving. Supporting the other, while the meadowlarks flitted and the wind gently blew around them.

Just as Wilmer and Nora had done. Building their ranch. Working, playing, helping neighbors and relatives, strangers and friends. Leaning on each other while the rest of the world went by. Together. 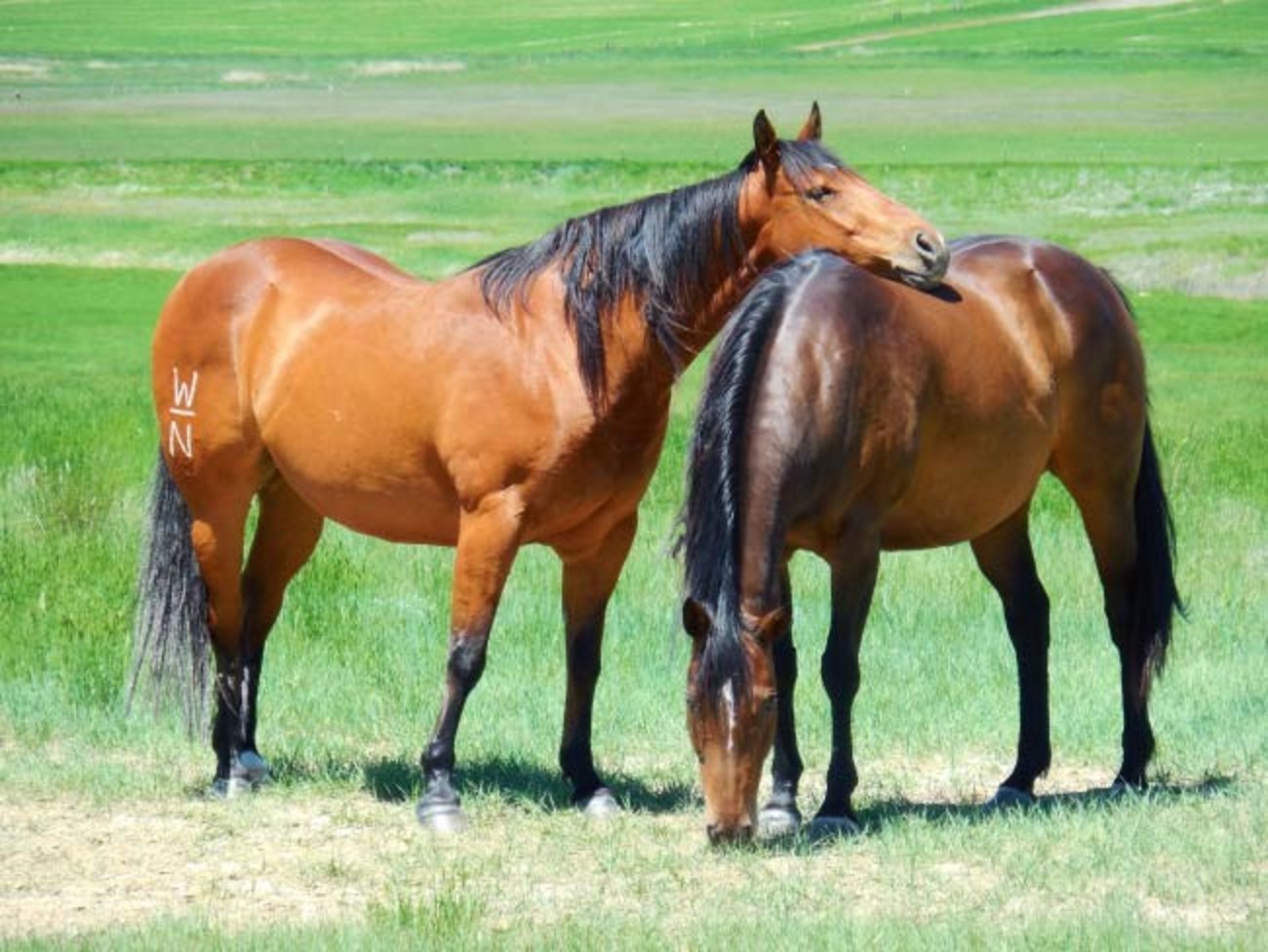 If there is one word to describe our Montana this spring, it would be “green.” Lush. Verdant. Healthy. Thriving. Wide strips of wheat curving... END_OF_DOCUMENT_TOKEN_TO_BE_REPLACED

I popped over the hill on the way home from the Cutting Place, to see a string of cows and calves coming down the... END_OF_DOCUMENT_TOKEN_TO_BE_REPLACED

I plopped the hamburger into the bowl, reached for the catchup in the frig and poured it over the top. Two eggs, briskly stirred,... END_OF_DOCUMENT_TOKEN_TO_BE_REPLACED